Research shows that SPSS is not intuitive to learn (Jatnika, 2015) and takes a great deal of motivation (Brezavšček et al., 2014). MagicStat is easy-to-use, even for students who have never used it before! See the results of our experiment below.


Research also indicates SPSS's output is difficult to manage (Prvan et al., 2002). For example, p values equal to ".000" is a common frustration for instructors. MagicStat's output is clean, simple, and easy to understand. It automatically shows only the relevant analyses, and helps the student with color-coded output (e.g., green for p< .05).


SPSS uses a proprietary .sav format. MagicStat can open any data file (including .sav!) and all graphs and tables can be exported in Excel with a single click.


Students must download SPSS or use a third-party application. MagicStat is available on the web via your favorite browser.


A recent experiment showed that statistics students who were already trained in SPSS were nonetheless faster and more accurate using MagicStat!

Furthermore, MagicStat helps students who need it the most. The graphs below show how students with higher GPAs were more accurate using SPSS, but there was no relationship between GPA and MagicStat performance. 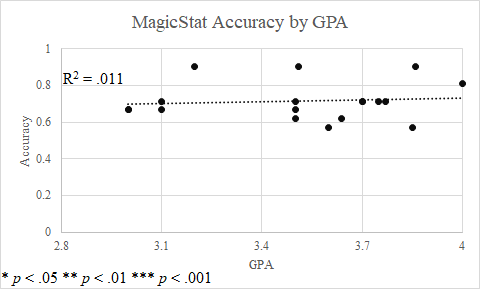 We turn data into information

We turn questions into answers

MagicStat is like all the other stats software packages out there, except, you know, better. We help you explore and analyze your data in a minute. Yes, it’s like Magic.

(if you must know) MagicStat is built on Python and Django.

We believe that if you have a research question, you shouldn’t need years of statistics education to answer it. Let us help you.

Your data is just that: your data. We never use the data you upload for any purpose other than your analysis. In fact, we destroy any data after you upload it to the site. Yeah, we take this seriously.